The Altair 8800 is an ideal platform for reliving the birth and explosion of personal computing. Unfortunately, with the Altair's status as a collector's item, the going price for the computer is now $2,500 or more. In addition, keeping the vintage hardware running can be an on-going effort, often relegating the computer to a "keep your hands off" status. So to get this great educational tool into the hands of hobbyists and students, I decided what the world really needed was an affordable and reliable Altair 8800!

I set off to create an accurate replica of the Altair 8800. Unfortunately, it quickly became clear that in order to meet price and reliability goals, the internal electronics of the replica would have to be different than the original 8800. With this concession in place, the goal became creation of a replica – that with its cover in place – duplicated the Altair 8800. 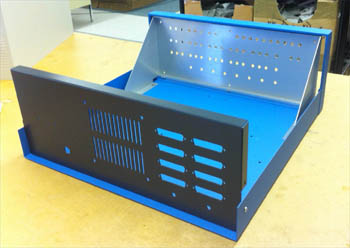 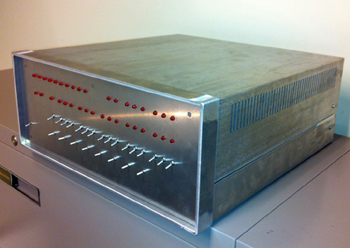 The Altair 8800's front panel and case are instantly recognizable, therefore, replication of the physical appearance of the Altair was an important aspect of the design. Unfortunately, the cost of purchasing the Altair's Optima case would have required doubling the target price established for the clone. In addition, it was going to be very difficult to purchase the Optima case in a timely manner.

The choice was made to design a new enclosure from scratch in order to stay within price constraints and to maintain control of delivery.

These pictures show the case prototype before paint and an inside view of a production version of the replica case.

Without the original hardware inside, the Altair 8800 Clone must emulate the Altair's electronics with modern hardware. The full Altair configuration detailed on the home page is implemented in the Clone on a single circuit board. The board centers around a Microchip PIC24FJ128 microcontroller connected to a few support chips and the array of front panel switches and LEDs. 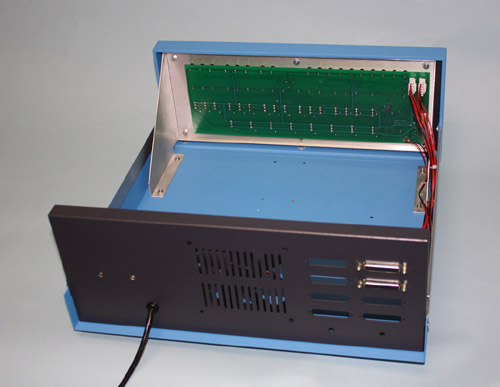 The 8080 processor emulation was designed from the ground up to be as accurate as possible. The emulated CPU duplicates the performance of the 2Mhz 8080 in the Altair 8800. Emulation is performed at the memory cycle level. Every LED on the front panel is updated with each memory cycle. Instruction timing was a natural fall out of the memory cycle emulation. The result is a very accurate replication of Altair program execution and front panel activity. The processor emulation includes interrupt detect and acknowledge cycles – even supporting these cycles during the HALT state.

The 8080 CPU emulation in the Altair Clone passes a tough set of CPU tests that several popular emulators on the internet cannot pass in their enitirety.

Emulation of the supporting hardware – especially the front panel hardware – adds to the accuracy of the emulation. The real front panel, for example, implements memory examine and deposit functions by jamming instructions into the 8080 processor. This results in a few unexpected artifacts if an examine or deposit operation is done when the processor is not stopped at an M1 (instruction fetch) cycle. Because the Altair Clone emulates the front panel hardware instead of directly performing memory examine and deposit functions, these same artifacts appear when operating the Clone.

Eight PROM slots are provided. Each slot is up to 2K in length. The PROM slots replace RAM in 256 byte increments. PROM content is non-volatile and is immediately available upon power on. PROM content is initially loaded via the serial port from a .hex or .bin file on a PC using the Clone's Configuration Monitor.

When the 8800bt Turnkey board is enabled, an IN from port 255 (the sense switch port) disables PROM and enables the overlaid RAM. This provides access to a full 64K of RAM. The PROM is re-enabled whenever the computer is reset from the front panel or at power on. This duplicates operation of the original Altair Turnkey hardware. 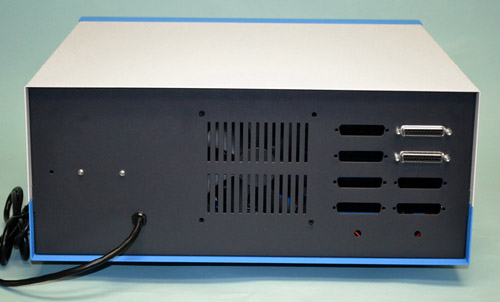 The Altair Clone provides two RS-232 serial ports on DB-25 connectors mounted in the rear panel of the computer. The optional Audio Cassette Interface adds a third serial port to the rear of the computer. These ports be configured to look like numerous combinations of ports from the 88-SIO and 88-2SIO boards. The interrupt capability of both boards is fully implemented. The Clone also implements the 88-2SIO's RTS and CTS handshake lines on the first two serial ports. The DCD signal is not implemented on the rear connectors.

The original 88-ACR Cassette Interface utilized an 88-SIO board for I/O with the processor. By configuring one of the two serial ports to be the SIO board of the cassette interface (I/O addresses 6 and 7), any software which utilized the cassette interface (e.g., loading BASIC, saving and loading programs, etc.), can function as expected by exchanging cassette data at RS-232 levels with a PC.

For a more realistic Altair experience, add the optional Audio Cassette Interface which adds a third serial port to the Altair Clone and provides connections for the microphone input and headphone output of a standard audio cassette recorder. The cassette interface uses the same modulation (2400Hz/1850Hz) as the original 88-ACR so that tapes are interchangeable between the Altair Clone and the original 88-ACR.

Data written to the 88-LPC (Okidata) or 88-C700 (Centronics) printer interface boards (e.g., LPRINT and LLIST from BASIC) can be routed to one of the Altair Clone's serial ports. This allows printer output to be captured on a terminal emulator or routed directly to a serial printer. 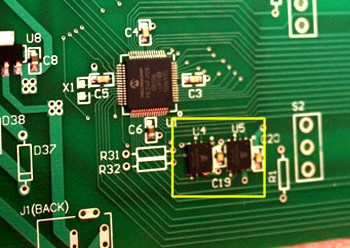 Boot ROMs, Disk BASIC, Altair DOS, CP/M, etc., all operate as if connected to original Altair floppy drives. A connection to a PC is required only to "insert" a new floppy disk. Other than that, a PC connection is not required.

Since the emulated drives are non-volatile, floppy disk content will be present any time the Altair Clone is powered on without having to re-connect to a PC. The three floppies can be swapped between drives without requiring a PC connection. Generally, this is done to put a different floppy into drive zero for booting.

The Configuration Monitor on the Clone is used to "insert" a new floppy disk by transferring a disk image from a PC to the Clone via a serial port. Transfer time is about 40 seconds. A disk image can also be transferred from the Clone to a PC for backup.

The 5.25 inch Altair Minidisk floppy drive and controller are also emulated in addition to the original 8 inch Altair floppy drive. The Minidisk has an unformatted capacity of 75K (35 tracks, 16 sectors per track, 137 bytes per sector).

Interrupts in the Altair 8800 Clone can be generated by both serial ports (2SIO and/or SIO for both transmit and receive), the floppy disk controller ("sector true" interrupt at the start of each sector), by the real-time clock (present on the emulated 88-VI/RTC vectored interrupt and real-time clock board), and by the 88-C700 Centronics printer interface.

The 88-VI/RTC prioritizes interrupts to the 8080 processor from the vectored interrupt lines (VI0 - VI7) on the Altair bus. The board also provides real-time clock interrupts if required. While not widely used for most commercial software, the VI/RTC board is required by MITS Time-Sharing BASIC for the Altair.

If the 88-VI/RTC board is not enabled, then the default interrupt structure of the Altair (PINT with RST7) is used. In this case, all devices can be tied into the PINT line at the same time as the emulated devices all drive the PINT line with open collector outputs. As with the original hardware, all boards (other than the 88-VI/RTC) ignore the 8080 interrupt acknowledge cycle, so the 8080 processor sees a RST7 instruction on the bus (all data bits high) during the interrupt acknowledge cycle. 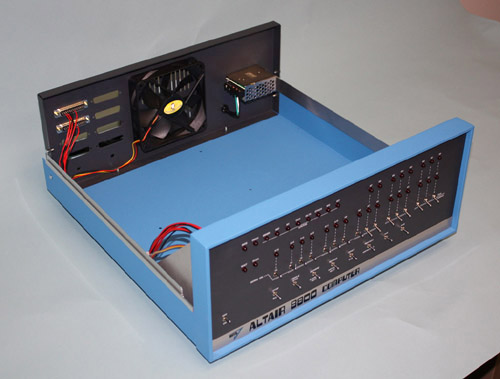 The Altair 8800 Clone is powered by a 15 watt, 12 volt power supply. The computer is shipped ready for 100-240 volt operation with a US style plug. Operation from an international power main requires only a plug adapter as the power supply automatically adjusts for 100-240 vac power.

A chassis fan is provided solely for effect. Without the fan connected, current consumption averages about 40ma. If desired, the Clone can be configured to run from a set of 4-AA alkaline batteries for over 50 hours!

While the primary goal of the Altair 8800 Clone is to duplicate the Altair 8800 experience (including its limitations), a few "cheats" are accessible through the Clone's configuration monitor: